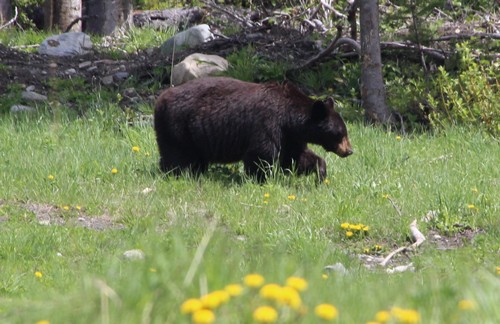 Bears in Sun Peaks can be found between March and November

Yes there is lots of Sun Peaks wildlife, including bears in Sun Peaks and the surrounding areas.  Locals and visitors alike, us included, get excited at the sight of a bear or group of bears foraging up on the slopes, on the Sun Peaks golf course, or even along the roads into and around Sun Peaks.

And don’t be completely surprised if you see a bear strolling through the village or the parking lot of your Sun Peaks accommodation.  Sun Peaks is in bear territory after all. It is exciting to see them in the wild, but just remember as cute and docile as they look, they are wild.  And if they are intent on filling up with as much food and as many calories as possible, or protecting their young, they can be very unpredictable and protective.

Following along the lines of the old expression ‘a fed bear is a dead bear’, we have compiled some points to consider to keep both you and the bears safe in this beautiful piece of paradise called Sun Peaks.

Type of Bears in Sun Peaks 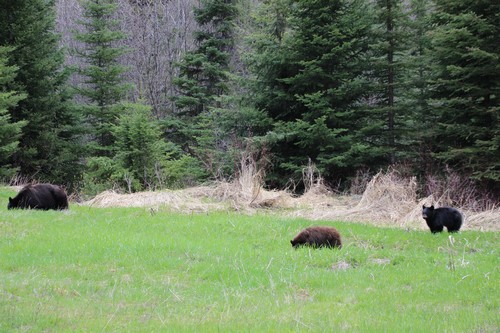 The type of bears you will find in Sun Peaks are black bears.  While their fur may appear black, brown, or even a light cinnamon color and with a brown muzzle, you won’t (thankfully) find grizzly bears in the area.

Black bears are not typically as aggressive as grizzlies, but can still be extremely dangerous when startled or when protecting their food or their cubs,

Adult black bears in Sun Peaks can range from 50 – 270+ kg (110 – 600lbs) with the females typically being smaller.  They are smart, curious, have an incredibly keen sense of smell, and hungry omnivores (meaning they eat anything).  And they are very powerful, have incredibly sharp claws, and while they may not look it, they are very fast, being able to reach speeds of up to 15 metres/second (50 feet/second) and are also very good at climbing trees and even swimming.

The less interaction bears have with us, the better.  It is important that you respect them as wild animals and DO NOT make them accustomed to us. 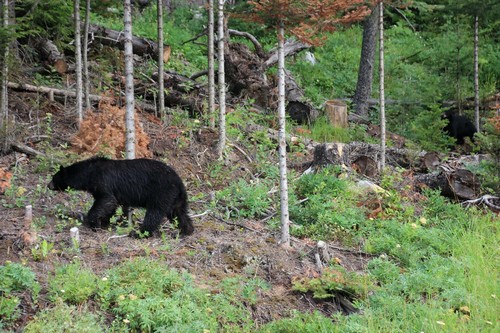 -          Do not try to feed them or leave food/garbage out in the open.  Use the bear-proof trash containers throughout the village and along the Valley Trail.

-          Do not try to get close to them to get a better picture.  Do not approach them.  Do not get out of your car if you see them along the road. Do not try for a wildlife selfie!

-          Do not leave food in your vehicles.  With their great sense of smell and powerful claws, they can quickly destroy your vehicle.

-          If you are a resident or long-term renter, check to ensure there are no berries or fruits on the bushes or trees around your property.  Mountain ash trees have been planted around Sun Peaks over the years but need to be removed as the berries are an appealing fall treat for the bears and they sometimes walk through the village in search of them.

-          Keep children, elderly, and pets close to you if out walking or hiking the trails.  Hike in groups if you can.

-          Make noise – carry bells or other noise making devices.  Bear bells can be bought at various retailers in the village, such as the Lone Wolf Gallery

-          Consider taking bear spray with you.  In BC, there are certain rules when it comes to buying bear spray so you will probably need to bring it with you when coming to Sun Peaks.  And if you have it, learn how to use it properly and make sure the safety tie has been removed.

-          Be on the lookout for signs of bears in Sun Peaks – fresh piles of scat, fresh footprints in the mud, freshly turned over rocks or logs, etc.  And listen – we are positive we have heard some warning ‘huffs’ in the past while hiking so we quickly left the area.

-          If you see signs of a recent animal kill, such as a carcass or flock of birds around, assume the bear doesn’t want to be interrupted during dinner and quickly leave the area.

-          If riding quickly through the trails, make noise and always be prepared to change direction quickly if you startle a bear.

What to do if you are too close to a bear 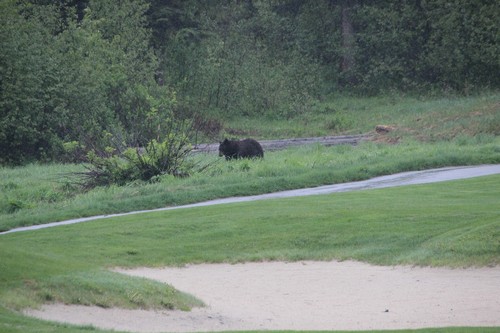 Black bears in Sun Peaks tend to keep to themselves and just move around looking for the easiest, high calorie food.  They are typically active between the months of March to November, and you can often see them on the ski runs while you are relaxing in in the village or while heading up on the chairlift to go hiking or sightseeing.  They don’t particularly want anything to do with us, so if they know we are coming, they will quickly disappear into the woods to avoid confrontation. So the very best thing to do is to see the bears from far away.

If you are heading up into their territory on a hike or bike ride, continue to make lots of noise so they can avoid you – that keeps them and you safe.  While bears at Sun Peaks are not known to attack anyone and chances are they will be trying hard to avoid you, always keep the following points in mind:

-          Respect their space.  If you see them far ahead, change direction and leave them alone.

-          If you do happen to find yourself close to a bear, do not panic – remain calm and look around for an escape route while assessing the situation.

-          Stand your ground and look at the bear and maintain eye contact while calmly but assertively speaking.  A recent news clip I saw showed a man calmly telling the bear to go away bear, and it did.  If the bear can recognize you as a human and does not perceive you as a threat to their safety, food or family, they will usually turn and walk away.

-           While calmly  but assertively speaking, back away slowly while maintaining eye contact.  DO NOT turn and run – it may invite a chase and you will not win.

-          If the bear still continues towards you, remain calm.  It may growl, huff, snort, hit the ground with its paw, pop its jaw, or may even charge towards you in a (hopefully) bluff charge.  All signs that it feels threatened and you need to remain calm and find a way to back out from the area.

-          However, if for some reason the bear does attack, which is very unlikely, fight for your life!  Scream, punch, kick, throw rocks, mud, sand, sticks, whatever you can find.  Trying to outrun a charging black bear or trying to play dead and hope it will go away will not work.

So yes, there are bears in Sun Peaks.  Cool to see, makes for some great photo ops, but please follow the points above to ensure your safety and theirs.

We have unfortunately seen a few bears recently that have become too accustomed to humans and have had to be destroyed – such a shame.

Sun Peaks is working hard to become a “Bear Smart” community.  Click for more information about Bears in Sun Peaks.